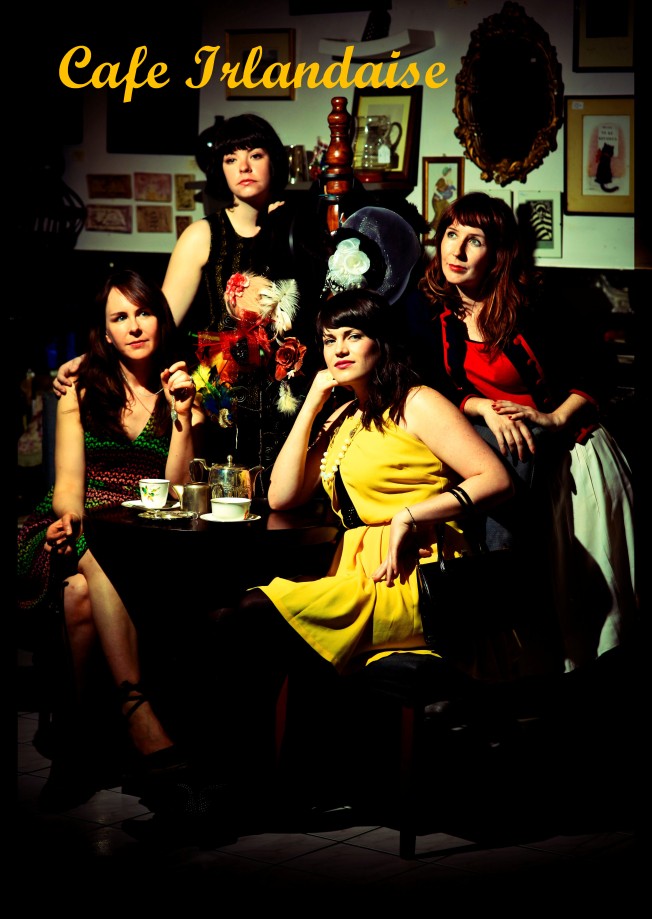 Café Irlandaise is a great compilation of female Irish musicians/vocalists that was put together by Valerie Hely and released early this year. It’s not so common in the past few years to see an all-female compilation on the shelves – post-Riot Grrrl and in the late 1990s / early 2000s, there was a (welcome) rash of books and compilations exploring the idea of women-only spheres.

But of late, the notion of having to showcase women’s music in the context of it being surrounded by other women’s music hasn’t been as widespread. (The reappearance of the Woman’s Heart compilation is more of a nostalgic anniversary celebration than anything else.) There are both positives and negatives to this, as it helps to show that music made by women isn’t ‘women’s music’ and only there to be seen in relation to the performer’s gender, but also means that there are less examples of spaces that celebrate music being made by women because they are female (given that the challenges male musicians face aren’t always the exact same as those female musicians face)

As you can see, within that above sentence are the contradictions encompassed in the idea of an all-female anything. It both includes and excludes, creating a space (that in Riot Grrrl times was seen as a ‘safe’ space, for example) for women that both puts them in the spotlight – but also removes them from the normal world of working alongside their male counterparts.

But such actions should be viewed through lenses that also take in the fact that the world of music is not, and never has been, free from sexism (or racism, or homophobia, etc). So celebrating women’s role in any form of music is a gentle two-fingers to those who ever thought women shouldn’t be on stage, or performing, or writing music… just as celebrating the output of gay musicians, transgender musicians or musicians of colour, for example, is also an important way of acknowledging how entire communities of people have been (and are) marginalised.

Café Irlandaise doesn’t claim to have any political beliefs behind its creation; and from what I can see, Valerie’s sole and laudable aim is to showcase some of the many female vocalists and musicians working in Ireland. It’s a great snapshot of who is making music now, and it’s important to note that all of the acts were chosen so that their music complements each other, rather than it being a slapped-together compilation of random odds and sods.

I was curious to find out more, so the current tour – which ends tonight at the Pavilion venue in Cork city at 8PM – was the perfect opportunity to ask Valerie some questions about how it all came about.

Can you tell us about Café Irlandaise – where the idea for the compilation came from and why you put it together?

The idea came about when it struck me how many individual, talented and strong contemporary female singers there are in Ireland at the moment – writing and recording gorgeous songs. I wanted to put together a collection of tracks which would act as a showcase for this talent. I think this is something to be highlighted and celebrated.

What were the most important things for you about putting together an all-female compilation?

I’ve listened to a lot of compilation albums and have found at times that tend to be a group of unconnected tracks all thrown together, without much thought put into arrangement or flow.  In trying to avoid that, I spent a long time carefully choosing female artists (both in bands and solo artists) who had tracks which I thought would sit well alongside one another, as well as suit the overall vibe of the compilation.  I took the liberty of selecting a track from each artist and thankfully they were all fine with that.

What other things did you consider, besides gender, when putting it together?

My aim is for every aspect of the compilation and tour to connect in some way and I wanted to create an image for the album cover, of a girl who looked Irish and edgy. There’s a model in Cork called Kellie Forde, who I thought has just the right look for what I had in mind and she was delighted to get involved. She was one of the contestants in the current series of “Britain & Ireland’s Next Top Model” .

That I don’t know, however we have found that audiences have been very attentive and interactive with us for the gigs we’ve done so far together. At times you could hear a pin drop and it’s unusual at gigs these days for people not to be chatting during the songs.

Is sexism an issue that female musicians face regularly – and do they tend to talk about it? Is it taken seriously?

It’s not something that I’ve experienced and hasn’t been discussed as such amongst us. I asked the girls what they thought and here’s what Sí said ‘I don’t think I have ever faced sexism as such, just the assumption from people that because you are a girl and you write songs that your music will fall into the singer songwriter/songs about relationships/chick music category. Which mine do I suppose. But still, annoying maybe for those who don’t.”

What was the reaction to the compilation?

When we released the compilation as a free download, we didn’t have any expectations as such, but the reviews in both the national and local press have been outstanding. It seems to have really clicked with a lot of people and they started wanting to hear more tracks from each artist on it – which was one of the objectives of the compilation in the first place so that’s cool!

When did you decide to go on tour, and who has gone on tour?

A few months after the release I approached the 3 other Cork based acts (Foxglove, Sí and Bona Fide Federation) and asked them if they’d like to tour together under the ‘Café Irlandaise’ name. They loved the idea and we pooled our contacts and experience to make it happen. We’ve had great support from so many friends and acquaintances along the way, such as graphic artists who designed the cd cover/posters, photographers, film-makers, and cafés (for the photo shoot).  ODi and Sive from the album have also joined us in Limerick and Galway.

How has it gone so far and was it what you expected?

It’s been a total blast so far! Great fun altogether. I felt it would go well anyhow, because we’ve gotten to really know and like each other while we’ve been organising this tour and I think that positivity and energy is shining through.

I know I’m biased, but the standard of each acts is outstanding so I’m in awe of each one of them when I see them performing.

We’re gotten some super feedback from the audience and they’ve been saying things like ‘these singers are amazing – why haven’t I heard of them before?!”. They also remark on the fact that all the acts that have such different styles of music yet blend together so well on the same night.

Another highlight for me is when we all go on stage at the end to perform a couple of tracks together.

When did you yourself start making music, and who inspired you?

I’ve been singing and making music for as long as I can remember. Started in the church choir, then moved onto busking, joined a rock band in college followed by a hip-hop band in Sydney and had a short stint as an entertainer for banquets in a medieval castle. Now I’m one half of electronica duo ‘In Valour’ and we also have a track on the ‘CaféIrlandaise’ compilation album.

I’m inspired by creative people who have the drive and self-belief to make their ideas become a reality.

What are the future plans – will there be another compilation?

I’ve been asked this a few times if I’m going to put together another compilation and have even been contacted by various artists who’ve asked me to consider them for it.

I have a few other ideas floating around my head at the moment though which I’ll run by the other artists on ‘CaféIrlandaise’ and will see if we can develop them together.