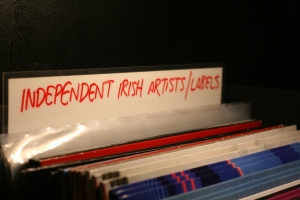 If you’re someone with an interest in the Irish music scene as a whole, a great festival to give you an insight into what’s going on here is Hard Working Class Heroes. Yes, it doesn’t cover every single band in the country but it’s a good snapshot of what’s happening nationwide. One interesting aspect to the festival is its panel discussions, where people working in the music industry in a number of different countries gather to give their opinion on subjects such as technology, downloading, labels, and more.

Jim Carroll of the Irish Times was the man asking the questions during the sessions. Late last year, DCTV, a Dublin-based community TV station, asked me would I be interested in hosting two discussion shows on the panel sessions for their Community of Independents series. Despite having no TV experience at all and a mortal fear of seeing myself on the screen, I said yes – sure why not do one thing every day that scares you, eh?

The shows feature Andrew Bushe from Estel and Keith Johnson from IMRO chatting to yours truly – they both come from very different places on the musical spectrum. Andrew had an interesting viewpoint as an independent musician active in the Dublin scene for years, while Keith represented the industry side of things.

Here are the videos, part one… and part two.

DCTV has also produced some fantastic band profiles, interviews and a weekly music show, all of which can be viewed on its jam-packed Vimeo page.