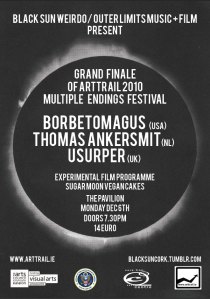 This Monday sees another of the weird and wonderful Black Sun gigs taking place in Cork city. Conceived by Vicky Langan and Paul Hegarty, Black Sun is a night quite like none other – a gathering of unusual, weirdo and avant-garde musicians who will perform in the historic Pavilion venue.

This month, the gig will take place on 6 December to deliver the grand finale to the city’s ArtTrail festival, and will star snuff-jazz legends Borbetomagus and more.

Says Vicky: “Black Sun is a space where the adventurous can gather, whatever their musical preference, to find something new, strange and fantastic; a space where the experimental is not something clique-ish for the afficionado, but precisely the opposite – an opening of possibility. Black Sun is an outer limits/weirdo music and experimental film event that first erupted onto the Cork music scene in May 2009. It plugs in to the city’s vibrant mix of ‘alternative’ music scenes, bringing them together in an authentically all-embracing event – the response has been phenomenal, and its return eagerly anticipated. Earlier this summer, ArtTrail approached Black Sun to curate the grand finale of this year’s festival. This partnership has since spawned into a two-day micro-festival supported by the Arts Council and the US Embassy.”

On Sunday 5 December, two workshops take place at the former Sawmills site: one in junk-instrument building and improvising with Usurper, the other in storytelling techniques for comics. The latter is led by UK underground cartoonist Malcy Duff, whose comix and other artwork is being exhibited throughout ArtTrail at the festival box office on Copley Street.

Added to this will be an experimental film programme of work by Stéphane Marti, which has been curated by Maximilian Le Cain. Plus that’s not all – on site will be the Cork based made-to-order vegan desserts company ‘Sugar Moon’, selling delicious cupcakes, cake and raw chocolate treats.

Tickets for the grand finale are €14 and available from Plugd and on door on the night. Doors are at 7.30pm.

Tune into Arena on RTE Radio 1 on Tuesday night between 7.30pm and 8.30pm to hear how the gig went.